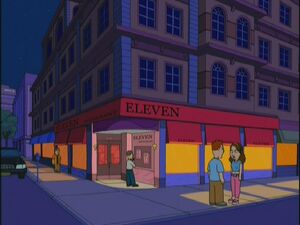 When Stan gets kicked out of the Log Cabin Republicans for previous anti-gay behavior, he goes on a date with Terry; who is mad at Greg and has declared "open season" to Eleven in "Lincoln Lover". They later go to a nightclub but Stan fails to become aroused when they reach the bedroom. Terry tells Stan that homosexuality is not a choice, contrary to Stan's belief.

Retrieved from "https://americandad.fandom.com/wiki/Eleven?oldid=31102"
Community content is available under CC-BY-SA unless otherwise noted.