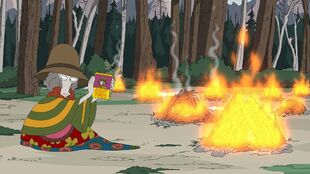 Roger's Disguise: Glad Handz from "The Mural of the Story" 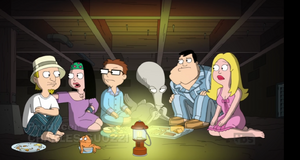 Despite her best efforts, the family goes to lengths to avoid eating her cooking by hiding in the crawlspace to eat after she goes to sleep. After they bluntly tell her that her cooking is lousy, she tries taking a cooking class on Klaus' advice. Although she strictly follows the recipe as given, the rest of the class improvises little touches here and there and her final product is judged to be bland. After learning about a chef specializing in cooking in the rough on Morning Mimosa Nights, Roger offers to hook her up with a persona of his that is very similar. Together, they fly to Patagonia, where Roger's second persona takes over.

Francine has a rough time in Roger's cooking class, even cheating in order to cook by retrieving her measuring cups from bear island where they were launched by Roger. But when he is attacked by bears that followed her scent, his remaining students all flee in the nearest boat. Francine is forced to drag him to another boat, where the chef Roger ripped off steals it. With Roger's leg on the verge of turning gangrenous, he forces Francine to cut it off and cook it, as there is no recipe for it. It turns out wonderfully, but also draws a bunch of bears. Francine is forced to slice up more of Roger to feed everyone, including the original chef who returned. They depart the island with Roger only having half of his body, comfortable it will grow back until he starts to panic that it may not. 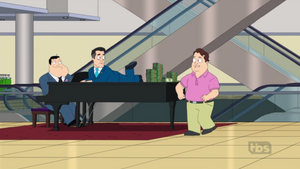 In the crawlspace, Stan bumps his head on a nail, rendering him unable to speak. They seek medical help from Dr. Kalgary who can't remove the nail until the swelling goes down. Deciding to buy him a new hat to cover the nail in his head, they take him to Nordstrom, where he's found to be an excellent piano player. His piano playing results in huge profits, delighting the manager. But when the family arrives to take him home, the manager asks for one last song. In the middle of a beautiful performance, Dr. Kalgary yanks the nail out of his head, returning him to normal. Desperate to get his moneymaker back, the manager tries to drive another nail into his head, but he is knocked over the side of an escalator and is torn in two, where Dr. Kalgary looks forward to creating a new monster.

Retrieved from "https://americandad.fandom.com/wiki/Eight_Fires?oldid=91404"
Community content is available under CC-BY-SA unless otherwise noted.