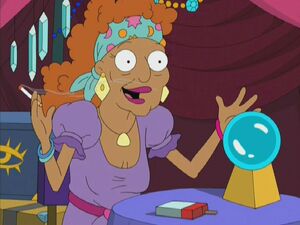 Eartha Mae Kitt (January 17, 1927 – December 25, 2008) was an American actress, singer, and cabaret star. She was perhaps best known for her highly distinctive singing style and her 1953 hit Christmas song Santa Baby. She took over the role of Catwoman for the third season of the 1960s Batman television series, replacing Julie Newmar, who was unavailable for the final season. Kitt lent her distinctive voice to the role of Yzma in Disney's The Emperor's New Groove, for which she won her first Annie Award, and returned to the role in the straight-to-video sequel Kronk's New Groove and the spin-off TV series The Emperor's New School, for which she won two Emmy Awards and two more Annie Awards for Voice Acting in an Animated Television Production.

Eartha Kitt provided the voice of the fortune teller at the carnival that tells Steve he is destined for greatness in "Dope & Faith" which Roger uses to trick Steve into thinking he has been accepted to Hogwart's School of Wizardry.

Retrieved from "https://americandad.fandom.com/wiki/Eartha_Kitt?oldid=88712"
Community content is available under CC-BY-SA unless otherwise noted.