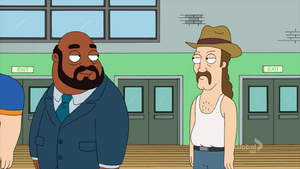 Earl is Principal Lewis' bookie who will bet on anything. In "The Wrestler", Lewis wins a bet on when a student at Pearl Bailey High School will get her first period. Lewis refuses to let Stan Smith pull Barry Robinson off the wrestling team when he becomes a danger to Stan's wrestling record after Lewis bets on Barry. Earl and Lewis along with several others bet on preschooler drawing with crayons at the Early Bird Nursery School. When little Susie draws outside of the lines, causing Lewis and several to lose their wages to Earl, they start cursing Susie, causing her parent to wonder if that nursery school is right for their daughter.

Previously, Earl can be seen in the Butte screening of Oscar Gold in "Tearjerker".

He appears at the CIA briefing and at Roger's church speech in "Great Space Roaster" and can be seen outside of Cirque du Soleil Moon Frye in "Stanny-Boy and Frantastic".

He is used as a Ferrari salesman as well as a patient at the free clinic in "Less Money, Mo' Problems". He also joins the mob in chasing Roger in "Ricky Spanish".

Earl also appears at the carnival in "Why Can't We Be Friends?" and welcomes "baby Franny" at the anniversary celebration in "National Treasure 4: Baby Franny: She's Doing Well: The Hole Story".

After Stan misses picking up Steve from his eye doctor appointment in "Kung Pao Turkey", Earl picks him up in a van with a license plate marked "CHLDLVR".

Earl watches in amazement as another patron of Roger's Place works a knife though his fingers in "She Swill Survive". He also appears as a member of the CIA of people who "breathe pleasantly" on Avery Bullock's neck in the same episode.

He can be seen at the Chimdale Roller Rink in "LGBSteve", hanging out at the deli in "Manhattan Magical Murder Mystery Tour", in Stan's depravity montage in "Daesong Heavy Industries" and joins the crowd at Langley Lanes in "Next of Pin".

He is in the rear of a crowd scene at 90s Fest in "The Witches of Langley". He throws a hammer at Steve in "Camp Campawanda". In "Bazooka Steve", he can be seen in the arena crowd, is in attendance of the Harlem Globetrotters basketball game in "Klaustastrophe.TV", is in the audience during the body-building contest in "One-Woman Swole" and is seen when Jeff's dog Fleabiscuit wins at Lanceton Downs in "Fleabiscuit".

He also appears during "Everyone is Happy in Utopia" in "300" and at the state fair lumberjack competition in "Lumberjerk".