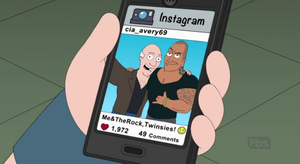 Dwayne Douglas Johnson (born May 2, 1972) is an American actor, former football player and professional wrestler. He is also known by his former ring name The Rock and is often credited as Dwayne "The Rock" Johnson.

The Rock appears in an Instagram selfie with Avery Bullock when Hayley flips through her phone in "The Long March". Bullock has tagged the picture as 'Twinsies!'

Retrieved from "https://americandad.fandom.com/wiki/Dwayne_Johnson?oldid=83594"
Community content is available under CC-BY-SA unless otherwise noted.