To start a complete script, see: "Dungeons and Wagons" on the Transcripts Wiki

Jeff: Okay, babe, the show's about to start; let's get ready.
Hayley: What are you doing?
Jeff: It's my half of our TV cuddle position.
Hayley: How about we just sit and watch?
Jeff: You have the best ideas! I'm gonna write that down in my Journal of Amazing Things Hayley Said, Volume III. [takes out a notebook and begins writing in it]
Hayley: I'm going to the kitchen.
Jeff: Cool. I'm gonna decorate this page with glitter. [starts sprinkling glitter onto the notebook page]
[Hayley enters the kitchen and sighs. The phone rings]
Hayley: [answers the phone] Hello?
[scene cuts to Jeff in the living room with a cellphone and a guitar]
Jeff: Hey, babe! I missed you so much I wrote a song for you.
Hayley: I'm dumping you.
Jeff: What?
Hayley: You're clingy..and you're smothering me, and..i-it's over.
Jeff: I can't believe you're doing this over the phone!
Hayley: [directly to Jeff] Goodbye, Jeff.
Jeff: Hayley, wait! [Hayley hangs up. Jeff says to Hayley directly] She hung up.

Hayley: I was so sick of Jeff, and now I can't stop thinking about him. I have to figure out a way to win him back from my stupid brother.
Klaus: Your brother is not the problem. The problem is Agathor. Kill him, and you'll get Jeff back.
Hayley: Oh, my God, you know how to kill him?
Klaus: The question isn't "Can I kill him." The question is "Do you like me?"
Hayley: Not really.

Roger: [falls out of the cupboard below the sink] Tulak nat-nat? Oh, I'm sorry, I've been locked in there for so long, I went all Nell and invented my own language.

[Steve is playing "Dragon Scuffle"]
Klaus: Please, let me play!
Steve: I don't think you're ready yet.
Klaus: Not ready?! I've been watching you for four years!
Steve: Night-time. [drapes a towel over Klaus's fish bowl]
Klaus: I'm not a parrot. That trick won't work on...SNORE! 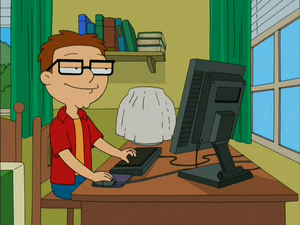 Jeff: Wow, I'm really intrigued. Although that could just be the Intriginol I took this morning.

Francine: [looks up, startled] Stan!
Stan: That's 2 Fast 2 Furious... which means you've already seen the first one! How else could you follow the highly cerebral storyline? It's true! You're bored of me, aren't you!
Francine: Uh-uh... [turns off the TV] This is all just a dream you're having. I represent your father. [deep voice] You never lived up to the goals I set for you. Bad Stan! Bad Stan! [while going upstairs] Baaaad Staaaann!

Stan: My God, I did it! I won! What a rush! [sees his pants are wet on his crotch] I hope this is sweat.

Hayley: Klaus, he's gonna kill me!
Klaus: Say Agathor's name backwards.
[scene cuts to "Dragon Scuffle"]
Agathor (Steve): [draws his sword] I shall strike you down with a single--
Morwin Nerdbane (Hayley): Rohtaga. [Agathor instantly drops dead on the spot. Steve stares at his computer still and dumbstruck. Jeff, Snot, Barry and Toshi stare in awe from their computers]
Klaus: That felt good. And I've almost died from autoerotic asphyxiation, so I know from good!

Roger: Sorry I missed the race, I was gettin' us victory Slushies.

[Jeff plays a sad tune with a pan flute. Hayley appears]
Hayley: Jeff, you wanna go get some pizza?
Jeff: You killed Agathor! How could you do that?!
Hayley: Oh, come on, it was just a character in a game!
Jeff: Yeah, but to Steve it was everything. When you dumped me, I blamed myself, but after what you did to your brother, you're just heartless! You're bad candy, babe!! [closes van door on Hayley] And stop enjoying my mural!

Roger: Okay, I'm going in. You cover me. [Roger enters the mini-mart. Stan looks at his gun]
Stan: Wait, what am I doing? I'm a man of the law. I'm gonna handle this my way. [enters phone booth. Roger is chased by an Asian wielding a baseball bat]
Roger: Shoot him! Shoot him in the face! [falls, beaten with a female kicking his butt; Stan obviously waves the phone book] I can't believe this turns some people on..!

Zamfir (Jeff): This isn't a makeup quest!
Morwin Nerdbane: Absolutely. All business. [reaches to hug Zamfir]
Zamfir: No hugs.
Morwin Nerdbane: It was a business hug, but okay. You're the goat...man...thingy.

Morwin Nerdbane: The Castle Roodpart. Who comes up with these names?
Zamfir: In this world, Roodpart is probably some ancient mystic word with--
Morwin Nerdbane: Oh, crap. It's "trapdoor" spelt backwards. [the floor separates, and both fall screaming]
Zamfir: Oh, there's my penis!

Zamfir: Y'know, we make a great team. I guess I could give us another chance after all.
Morwin Nerdbane: Actually, I kinda met someone...
[A god-like angel with the head of a bull flies in through the skylight]
Bull-Headed Angel: How's it goin'?
Zamfir: What? When did you meet him?!
Morwin Nerdbane: Remember that tavern, and you went to the bathroom? It just kinda happened.
[Jeff stares in awe from his laptop, then smashes up his laptop in anger with a hammer]

[Fladnag (Barry), Kubalek (Snot) and Toshi are sitting around a campfire, laughing]
Agathor (Steve): Hey, guys. Miss me? [Fladnag, Toshi and Kubalek stare in awe. Agathor draws his sword] Now you shall learn the meaning of--
Flatnag (Barry): Rohtaga! [Agathor instantly drops dead on the spot. Cut to Steve]
Steve: Son of a bitch!

Retrieved from "https://americandad.fandom.com/wiki/Dungeons_and_Wagons/Quotes?oldid=87521"
Community content is available under CC-BY-SA unless otherwise noted.