Dreaming of a White Porsche Christmas 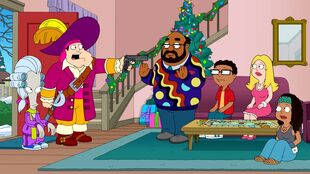 Dreaming of a White Porsche Christmas
Stan wishes he was like Principal Lewis. 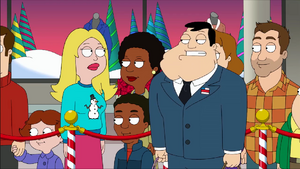 The family goes to the mall to get their picture taken for the family Christmas party invitation and Stan half-heartedly shops, just picking up whatever he can grab. When Francine points out that she is wearing a sweater that matches the one he picked out, he has to return it. When he bumps into Principal Lewis, he insists he come to the party since his antics excite everyone. When Stan is ignored at the party except for running errands, he wishes he had Lewis' life while placing the angel on the tree.

When he wakes up the next morning, he finds that his wish has come true although Roger is still his companion, apparently due to touching Stan's bottom at the moment of the wish. He starts to enjoy his new life but decides he needs to consult with Lewis to get an idea of how to further enjoy it. But when they find Lewis, they discover that he has inherited the family. This causes Stan distress and he tries to wish things back without luck. Roger speculates that he might need to learn a lesson first but Stan refuses to be that patient and confronts the family, although they don't recognize him as their dad and husband. When Lewis reveals that he has also become a CIA agent, Stan takes his gun from his own accustomed place and takes the family back to his home, holding them at gunpoint. 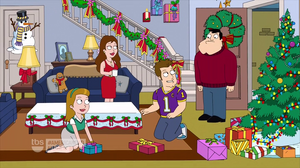 As the CIA arrive, Stan desperately tries to get the family to remember him. Francine feigns remembering to get them turned loose and they go free to the CIA, who then lob gas at Stan. He tries to flee, but is caught when leaping off of a bridge and is riddled with bullets. Having apparently learned his lesson, an angel meets Stan and takes him to an ideal dream family that is not his own. Stan realizes that things are not correct and calls for his angel. He reveals that the dream family is his real family and the one he knows was given to his as punishment. When he wants to return to the family he knows, he is rejected. Opening gifts with the family, he finds he is still a bad father and when Roger arrives without knowing who he is, he tries to convince him and eventually succeeds in winning him over by telling him about his crazy habits. To try to reverse the wish, he has Roger place the angel on the tree and make a wish, but gets a Porsche instead. Stan tries to get the family to wish he wasn't around, but fails. Gazing at a wine glass that looks similar to what Francine wanted, he makes note of a small dirty spot and finds that his new wife hates her cleaning being criticized. He gets her to wish they weren't married and then places the angel on the tree, allowing Stan to go back to the family he knows, although Snot tries to pass himself off as a family member as well without luck.

Previous Episode /// Dreaming of a White Porsche Christmas \\\ Next Episode