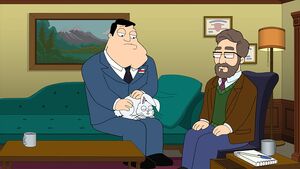 Dr. Ray Petit is the CIA thereapist that Avery Bullock sends Stan to see after he is nearly involved in a fatal car crash in "The Shrink".

To help him cope, Dr. Ray introduces Stan to miniatures, but Stan takes it further, using a CIA shrink ray to reduce himself into the miniature world where it’s all safe and protected. But after the family discovers him in his own little world, he shrinks them as well and shoves the shrink ray off the model out of reach.

As they reluctantly explore Stan's world, Roger enters the basement and spills a bottle on wine which attracts ants, who are further drawn to the food Stan has used to build parts of his model. As Stan and Francine try to escape, Dr. Ray arrives to help, but is killed and eaten by the ants.

Stan goes to see the doctor when he experiences anxiety after being yelled at in "Klaustastrophe.TV". Thanks to the doctor, he discovers he has issues stemming from when he believes he was kicked out of the Harlem Globetrotters basketball camp by Curly Neal. Taking Steve along to a game, he finds out that the newest generation of players are unfamiliar with the old squad, but he is redirected to a farm where they spend their retirement. He finds out that he wasn't really kicked out of a camp, but that the players tried to take him in when he was abandoned by his father and they had to return him when he came back. Energized, Stan decides to work as a 'lone wolf' to go after the dealer but finds himself captured. Thanks to a tracking chip implanted by the doctor, he leads the Globetrotters to Stan and they attempt a rescue, but are surrounded and when the doctor fumbles a grenade, his head is blown off.

When Stan and Roger go into shock after seeing Steve's tailor brutally killed in an escalator accident at the Langley Falls Shopping Mall in "The Hall Monitor and the Lunch Lady", Hayley and Francine struggle to find a way to snap them out of it. Dr. Ray suggests taking them back to the mall. This fails to work, but when Dr. Ray is sucked into the same escalator, the girls go into shock as well.

When Stan goes into a funk over the death of the CIA groundskeeper Billy Kloops in "American Data?", Francine takes him to consult with CIA psychologist Dr. Ray Petit, who convinces him that a possible way to honor Billy's memory is to clear the central quad, which he never had clearance for, but Stan does. As he finishes, a whirlwind spirit forms and thanks Stan for completing his dream. As he prepares to finish the job by blowing the whirlwind into the sky, Dr Ray gets caught up and nearly gets carried away. Stan angles the blower slightly so Ray starts the fall back to the ground, but then readjusts it to slow his descent. Dr. Ray's mouth lands on the blower until he fills up with air and explodes.

Dr. Ray is shown in an emergency room after eating under cooked meat-ghetti and spag-balls in "Businessly Brunette" and appears during "Everyone is Happy in Utopia" in "300".

Retrieved from "https://americandad.fandom.com/wiki/Dr._Ray_Petit?oldid=91705"
Community content is available under CC-BY-SA unless otherwise noted.