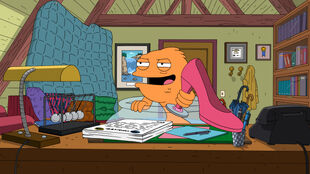 Dr. Klaustus
Roger acts as the family therapist as his alter-ego "Dr. Penguin" until he is sent out to fight the war in Iraq.

Roger's Disguise: Winfrey from "An Incident at Owl Creek" 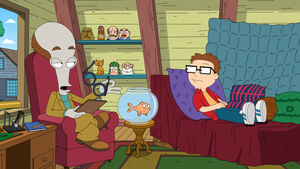 While Roger acts as the family therapist as his alter-ego "Dr. Penguin", he instructs the family to lie to each other about the various hang-ups; Steve taking his girlfriend to Greg and Terry's house to pretend they are his parents because he is embarrassed by Stan and Francine, Stan can't stand to eat Francine's cooking, Jeff can't be intimate with Hayley without thinking of Francine and so on. Roger's advice seems all wrong to Klaus so he gets Roger's persona of Sgt. Pepper sent to Iraq so he can straighten everyone out. However, no one wants to listen to him when he tries to take over Roger's practice so he decides to get everyone to face their hang-ups by exposing everyone's secrets to each other. But instead of the family seeking him out for treatment, they become angry and hostile towards each other and still refuse to consult Klaus. As Stan is using Klaus as a target with darts, Klaus promises to get Roger back. 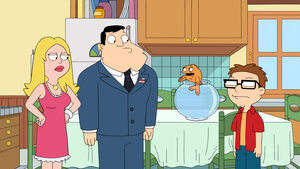 In Iraq, Roger is revealed to clean toilets, but is traumatized when trapped in the bottom of an outhouse that is used. When Klaus arranges for his discharge, he refuses to leave, feeling he isn't fit for society any longer. Not about to give up, Klaus removes Roger's Sgt. Pepper persona as he sleeps and dresses Roger back up as Dr. Penguin. Back home, Roger arrives and discovers the family is too far gone for him to help as lying to each other is his only advice. As Roger settles in with a copy of US Weekly magazine, Klaus actually makes sense to him. Testing a theory, Roger discovers he can only take Klaus' advice seriously by holding up a copy of the magazine so he doesn't see Klaus as a fish.

Employing Sgt. Pepper once more, Roger gives the family good advice and then credits Klaus. The family realizes that they have forgotten that Klaus is a man in a fish body. As a reward, they send Klaus to a whorehouse but he soon learns that he is still in a fish body, much to his sadness.