For a complete script, see: "Dope & Faith" on the Transcripts Wiki

Father Donovan: And so we say goodbye to our dear old friend, Walter. Who was also qualified to ride a motorcycle! Amen. [bows his head in respect]
All: Amen.
Father Donovan: Now let's raffle off his stuff! First up... [Two church-goers push a paddle-boat into view] ...some kinda crappy little paddle-boat...
Stan: [excitedly] Ooh, I totally want that! [puts his hands together] Dear Lord, please make my ticket the winner.
Hayley: Oh, and now you'll win!? Even if there was a God, I doubt he'd run the universe like a vending machine, where you put in a prayer and out pops...
Father Donovan: [reads out ticket] 641.
Stan: Yes! Thank you, Jesus! [to Hayley] God is my co-pilot and the virgin Mary is my hot stewardess. Ding! More nuts, Mary!

Steve: You spent all your money trying to win a hat with antlers?
Roger: [furiously] I do not chose to discuss it!

Stan: Dear Lord, if you're not too busy giving the guys at McDonald's new sandwich ideas, I wanted to ask you something. 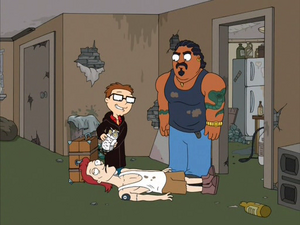 [Stan and Brett are standing on a beach shore, looking out to the ocean]
Stan: [Inhales deeply] Breathe it in. Just smell it! This rotting whale proves that God exists! [Camera pans out to reveal the two are standing by the decaying corpse of a washed-up whale] For even in death it provides sustenance for the Lord's other creatures. And a pretend jail for me! [Gets behinds the whale's ribs and presses his face between them like prison bars] Let me outta here! [Picks up a squid-like organ] Squidface does horrible things to me after lights out! Unspeakable things!

Roger: You would be pissed if I forgot to give you this magic wand. [Holds out one of his chopsticks to Steve]
Steve: Wow! It's so light! [Waves the chopstick lightly through the air] I can't tell if I'm leading it or it's leading me! [Notices the other chopstick] Cool! Is that another one?
Roger: No, that's a chopstick.

Retrieved from "https://americandad.fandom.com/wiki/Dope_%26_Faith/Quotes?oldid=89103"
Community content is available under CC-BY-SA unless otherwise noted.