Don't Look a Smith Horse in the Mouth 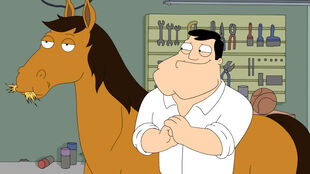 Don't Look a Smith Horse in the Mouth
Stan doesn’t want to give up his SUV. 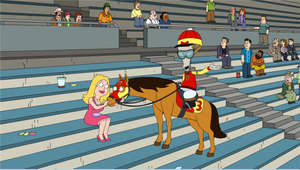 When Francine demands that Stan get rid of his gas-guzzling SUV because it’s draining the family of money, Stan bets on a horse race in order to win money and keep his SUV. He believes it's a sure thing when he sees the name circled on a racing form that he stumbles onto but it turns out Roger only circled the name so he could remember which horse he was riding while he was high. When the horse loses, its owner decides to kill it for the insurance money but Roger confides in Stan that he had been intentionally tranquilizing the horse to force a bigger win and convinces Stan to buy him. Francine becomes horrified that Stan has sunk their life savings into the horse but gives Stan a chance. As a prank, Roger convinces Stan to "service" the horse, and the horse is so traumatized that it is unable to race. Desperate that he might let down Francine, Stan switches brains with the horse and manages to win. 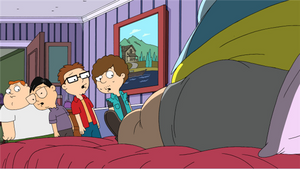 Meanwhile, bored with no new video games, Steve and his friends decide to see if a neighbor has any odd jobs for them to do, They find that he has become a morbidly obese shut-in. After working out around the house, he gets Snot to try to get the money from his wallet and Snot becomes trapped under him. To free Snot, they harness up Stan's body with the horse's brain and manage to lift Snot free. They find that the neighbor tricked them into staying because he was lonely. Steve manages to use Stan/Horse to pull his neighbor to where he can interact with other people again.