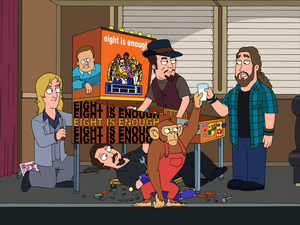 Richard Vincent "Dick" Van Patten (December 9, 1928 - June 23, 2015) was an American actor, known for his role as patriarch Tom Bradford on the television sitcom Eight is Enough.

Dick's likeness appears on an Eight is Enough pinball machine that is being worked on my members of My Morning Jacket in "My Morning Straitjacket". Despite some progress in the repairs, they continue to have trouble getting Dick Van Patten's eyes to light up.

The same pinball machine appears in the bar with Roger in "You Debt Your Life".

Retrieved from "https://americandad.fandom.com/wiki/Dick_Van_Patten?oldid=63823"
Community content is available under CC-BY-SA unless otherwise noted.