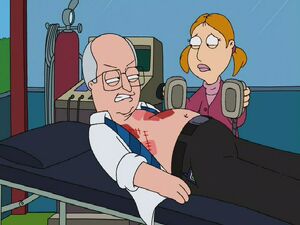 God breaks off from a call from George W. Bush to take a call from Dick Cheney in "Pilot (American Dad!)", calling him "sir."

Dick is seen at the CIA carnival in "Bullocks To Stan". While being defibrillated, he loses his Blackberry which is picked up by Steve and Roger who use it to make prank calls to world leaders. Steve claims that Satan's number is on Dick's phone.

Hayley is made to wear a "Bush/Cheney '04" campaign t-shirt after being tranquillized in "Bush Comes to Dinner". However, when Bush considers resigning and handing over control to Cheney, Hayley erases compromising pictures of Bush, comparing him favorably with Cheney.

Roger prepares to shoot down a CIA helicopter in "Blagsnarst: A Love Story" by referencing Dick Cheney's 2006 hunting accident in which he shot a friend.[1] Roger acknowledges the age of the reference, but blames it on more people not shooting their friends in the face.

Retrieved from "https://americandad.fandom.com/wiki/Dick_Cheney?oldid=82498"
Community content is available under CC-BY-SA unless otherwise noted.