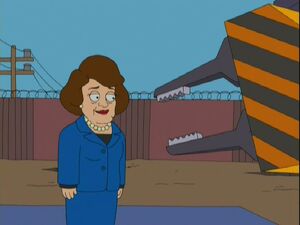 Dianne Goldman Berman Feinstein (born June 22, 1933) is the senior U.S. Senator from California and a member of the Democratic Party. Feinstein was first elected to the U.S. Senate in 1992, after serving as Mayor of San Francisco from 1978 to 1988.

Retrieved from "https://americandad.fandom.com/wiki/Dianne_Feinstein?oldid=68910"
Community content is available under CC-BY-SA unless otherwise noted.