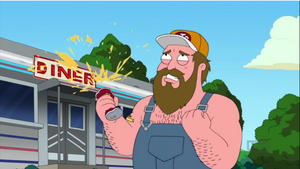 Derrick is one of the Lanceton Raceway Park 'derby donkeys', as coined by Roger, in "Demolition Daddy". He and the rest of the donkeys spend their time working on cars for demolition derbies.

Roger introduces them to Snot, who's father was Lonnie Lonstein, a former driver. Derrick takes a good sniff of Snot and confirms this. Later, after Roger steals Lonnie's old car from Snot, he calls in the derby donkeys to help him, with most of them being killed before even getting started to Derrick's distress. Thanks to a fast move by Snot in his mother's car as they pursue Roger, Derrick and another car take each other out.

Retrieved from "https://americandad.fandom.com/wiki/Derrick_(Demolition_Daddy)?oldid=84515"
Community content is available under CC-BY-SA unless otherwise noted.