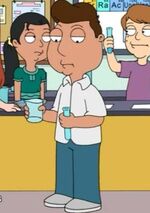 Dennis is a student at Pearl Bailey High School who makes many background cameos.

Dennis appeared in the pilot when Lisa Silver was dating Steve in the high school's cafeteria, he demands Dennis to get Lisa a steak that is more salisbury-like, due to Steve being school president.

Eileen holds onto Dennis' hand at the sci-fi convention in "All About Steve".

Dennis appears at high school in "Black Mystery Month", learning about Black History Month with Steve and his other classmates, at Wet, Young & Wild in "42-Year-Old Virgin" and at school the morning after Etan Cohen's Mar Mitzvah in "Bar Mitzvah Hustle".

He is seen in the stands during the football game between the Replicants and the Wolverines in "Every Which Way But Lose".

In the school gym in "Daddy Queerest", Dennis is shocked by the fact that anyone can get drunk and make out with a girl like Jewel.

He walks through the Langley Falls Shopping Mall in "Stan's Night Out".

Dennis appears at Space Camp in "G-String Circus" and is present when Malcolm Hathaway kisses Hayley in "A Jones for a Smith".

In "Merlot Down Dirty Shame", Steve experience 'lucid dreams' where he believes he can control his dreaming to do anything he wants. When he is pranked by Hayley and Klaus into thinking he is having a lucid dream, he attends school in his pajamas and underwear and runs amok in Mr. Pinkerton's science class. When he tells Amy that he will be her lab partner, she responds that Dennis is already her partner, prompting Steve to shove Dennis out of the way and kiss Amy.

Although there is no sign he boarded the doomed bus, he is seen at the station in "100 A.D.".

He appears in the audience of Cirque du Hey Hey Hey in "Stanny-Boy and Frantastic" and in the school cafeteria in "A Piñata Named Desire".

In "Toy Whorey", his teacher proves what he can get away with since receiving tenure by repeatedly striking Dennis. He also appears at the carnival in "Why Can't We Be Friends?".

Dennis works as a paper boy at the Langley Falls Daily News in "The Boring Identity".

Dennis is at the Familyland Theme Park, at times hanging out with Nathan in "Familyland" nd passes by the front of Alex Z's Tattoo Parlor in "Honey, I'm Homeland".

He also appears at Steve and his friends' party for the unpopular kids in "The Unincludeds" and watches the victory parade for The Langley Falls Bazooka Sharks in "Standard Deviation".

Dennis can be seen at Ian's birthday party in "Fantasy Baseball" and at the fight club in "Shark?!" and appears during "Everyone is Happy in Utopia" in "300".