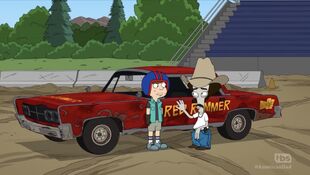 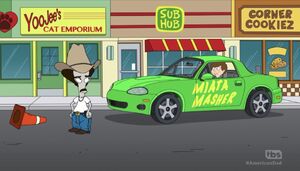 As the students prepare for driver's lessons, Snot's mom refuses to let him participate, but he gets secret lessons from Tuttle until he has a heart attack. Driving in reverse all the way to the hospital, he runs into a persona of Roger's who was his father's old demolition derby partner and agrees to help teach him to drive while searching for their old car, the Red Rammer. However, after taking him to a demolition derby track, he puts off the lesson for sex with the track tramps. Roger's Miata that they finally start to train in falls apart on contact with a scooter. Despairing of ever finding his father's old car, he discovers that his mother had parted the car and hidden the pieces around the house. Enlisting Barry and Toshi, they rebuild the car, but Roger takes off in it. Snot and his mother give pursuit, with Roger's old derby team running interference. Mrs. Lonstein makes Snot take the wheel, and he starts dishing out some punishment back. 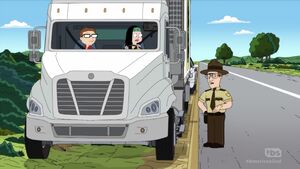 Meanwhile, After being blown off by Stan, Steve talks Hayley into taking him on a cross-country delivery for Sub Hub for his lesson. However, he discovers that the load of salami they are carrying is full of explosive chemicals and Hayley insists on taking the back roads. Hayley lets him take the wheel over a dangerous bridge, much to Steve's distress. When they later get pulled over, Jeff, who has been hidden in the back, nearly shoots the officer, but he is distracted by Hayley first and is run over by a passing truck.

As Snot, Roger and the others pass Hayley and Steve, they call in other truckers to give aid although they prove to be useless, so Hayley has Jeff light up surrounded by the explosive meat, giving them a boost to take out Roger's last henchman. With his mother rooting him on, Snot pulls his father's signature derby move, but only to buy his mother some flowers. Having given up the chase, Snot confesses that since his dad had left the family, he doesn't need anything of his, with his mom being the only family he really needs.