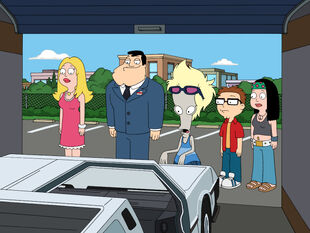 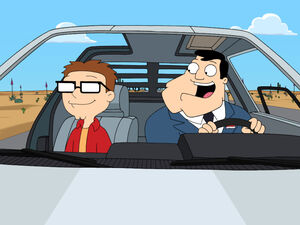 Steve feels neglected by his father. Urged to find something to bond with him, he finds out that Stan is excited about finally building his dream car: a DeLorean. Francine encourages him to include Steve, so the two take a road trip in search of the last piece Stan needs; a passenger side door.

The trip veers off-track when there is a mad dash across the country to Albuquerque, NM to get a door advertised on Craigslist as "first come, first served". Steve soon comes to realize that traveling with his father is not all its cracked up to be until he sees another father and son enjoying themselves. Still trying to reach out to his father, Steve tries to teach him how to blow bubbles with bubble gum and the car ends up wrecked. Further misadventures result in Stan losing his pants and wallet. Just when they begin to bond they see another driver that needs the same door. Stan and Steve reach a general store where Stan calls in favors from the CIA of having his own DeLorean and replacement pants delivered. 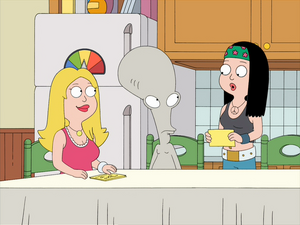 With Stan and Steve out of the picture, Roger, Francine and Hayley try to come up with a wild idea for an adventure of their own. However, they have trouble deciding what to do until Roger talks Francine into crashing a masquerade ball at the French Ambassador's. When things go awry at the ball, they return home to find Hayley with her own adventure, trapping magician David Blaine in an airless refrigerator. When Blaine collapses and they believe him to be dead, he reveals himself to be fellow magician Criss Angel, to Roger's delight.