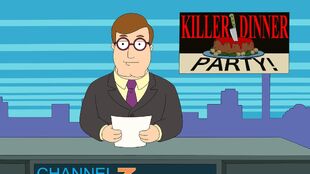 Despite a dinner-party killer stalking Langley Falls, Francine hosts a dinner party with their closest friends. "Uncle Roger" tries to set a tone by making Jeff vanish after the lights flicker, but none of the others are spooked. But when Tuttle comes up missing, Roger is blamed and tossed into the basement where he is beaten senseless. After he is found by the party, Greg comes up missing and a search finds Tuttle's body stuffed into a cabinet with a glass lens, leading to the belief that family friend Colonel Withersby is the killer. Hearing a scream where Steve and the colonel were searching, at first it appears that the colonel has claimed another victim, but they have actually found a dead delivery boy intended for Klaus' catering. 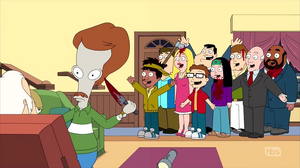 Back inside, Greg shows up and evidence points to him as the killer as the glass lens comes from his glasses. But when the lights go out yet again, he has been stabbed. He starts to reveal the killer claiming to have felt his face, but is killed by a falling chandelier. The lights continue to flicker, as Bullock reports being stabbed, and Roger eventually finds the bodies of Hayley, Stan, Steve, Lewis and Francine. With everyone else dead, only the colonel is left and he menaces Roger, who picks up a knife and stabs him multiple times before the lights are restored, revealing that it was an elaborate prank to show Roger that he's usually a childish jerk. Roger admits his stunts usually are childish, but instead takes away the wrong message and vows to increase the terror-level of his pranks.

Meanwhile, the real dinner party killer hails a taxi to the Smith home, having seen the news story by Greg complete with the address about it on the news.