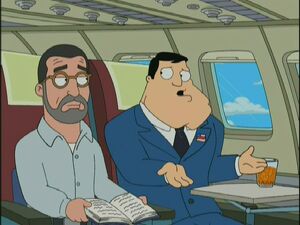 David Alan Mamet is an American author, essayist, playwright, screenwriter, and film director. His works are known for their clever, terse, sometimes vulgar dialogue and arcane stylized phrasing, as well as for their exploration of masculinity. Mamet received Tony Award nominations for Glengarry Glen Ross and Speed-the-Plow, as well as the Pulitzer Prize for Glengarry Glen Ross. As a screenwriter, he received Oscar nominations for The Verdict and Wag the Dog.

Stan gets advice from David on how to defeat car salesman Felix in "Failure is not a Factory-Installed Option".

Retrieved from "https://americandad.fandom.com/wiki/David_Mamet?oldid=51456"
Community content is available under CC-BY-SA unless otherwise noted.