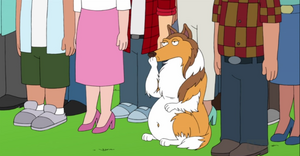 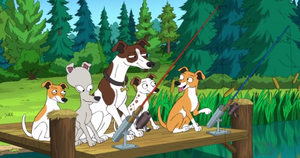 When Roger has sex with Darlene and shows the video to Fleabiscuit right before the final race of the Triple Crown in "Fleabiscuit" in order to demoralize him, Hayley manages to buy him enough time to get back in the race when she realized that if he loses, it'll break Jeff's heart. She calls attention to Darlene cheering on Fleabiscuit in the stands, while indicating her pregnant state. This motivates Fleabiscuit to win, prompting both Jeff and the dog to retire. Fleabiscuit is shown marrying Darlene and her eventual delivery. However, one of the puppies look suspiciously like Roger's Ryan, his racing greyhound persona.

Retrieved from "https://americandad.fandom.com/wiki/Darlene?oldid=82180"
Community content is available under CC-BY-SA unless otherwise noted.