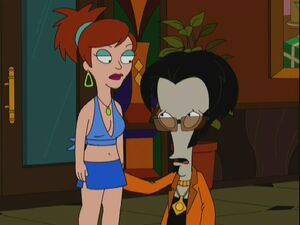 Daniella is one of the bar whores Roger in his persona of Rashid the Persian picks up a DÜSH in "When a Stan Loves a Woman". Over morning breakfast, he chews her out for bringing him the salt but not salting his food, then when he says she put too much salt on it and ruined it. He later trips her when they leave. When he dumps the girls. he says he was harder of Daniella than the others because he believed in her to become one of the skankiest hos he had ever had the privilege to throw out of a moving car.

She appears at Stan Smith's court trial along with Steve, Snot, Barry, and Toshi in "Man in the Moonbounce". She also appears at the kickball game at Chimdale Prison in the same episode, and when Francine walks Stan into the My Morning Jacket concert in "My Morning Straitjacket".

She passes by the front of Shonteeva's and hangs out at Black Villain's party in "For Black Eyes Only".

She is seen in the Jimmy Buffet's commercial in "Poltergasm", at Roger's Place in "She Swill Survive" when Avery Bullock reveals himself to be a Whitesnake fan and on DJ Iron Monkey's yacht in "Blonde Ambition".

She is seen at the Langley Falls Roller Rink in "LGBSteve".

A modified version of her character appears on the cover of Francine's Fashions magazine in "Anchorfran", at Roger's Burning Man in "Camp Campawanda", outside of The Skylark in "Flavortown" and on the fashion magazine cover that Roger reads in "Top of the Steve".

She appears on a magazine cover in "Cheek to Cheek: A Stripper’s Story".