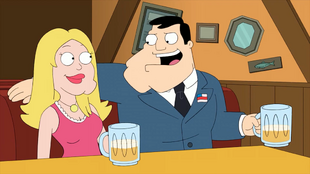 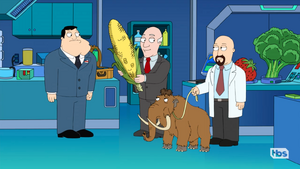 Steve and Hayley's childish behavior makes Stan question whether the kids are his. Hearing of a bed race in Langley Falls, he at first dismisses it as childish nonsense, but when Klaus points out the competitive side of things, he decides it's the perfect trick to toughen up the family. However, when they refuse to take it seriously, he goes to the CIA lab and discovers gene splicing experiments going on, inspiring him to subject the kids to his own genes. His experiments turn out to be a success, but when Francine objects, he injects her too. The changes not only affect their physical appearance, but their attitudes as well, until they lose patience with everything. When Stan goes to the sporting goods store after getting punched in the nuts by both Steve and Hayley, he finds out the family has been spreading their altered genes around the entire town.

When he confronts the family and demands that they follow him to the CIA lab to undo the damage, they knock him out cold and tie him up in the basement. After getting loose, he goes to see Matt at the CIA lab for help, who informs him that the family's kindness is a balance to his normal attitude, and the best solution is to find someone with an equal amount of kindness. As the family wrecks havoc in the bed race, Stan and Matt turn loose some gene-altered mosquitoes, and their bites return the entire town back to normal. 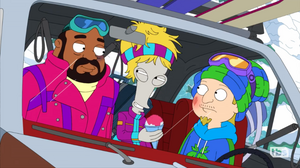 Meanwhile, with reports of a snowstorm heading towards Vermont, Principal Lewis, Roger and Jeff decide to go skiing. But thanks to Roger's horsing around, they end up sliding off the road, over a cliff. They come to a rest in a precarious position overlooking the ski lodge, but the slightest movement could send the car down in an avalanche. They decide to try tying the skis to the bottom of the car and coasting down, but while the idea is a success, they forget to get back in the car and it leaves without them. Without a second idea, Roger simply yells 'avalanche', which carries them down the mountaintop. They appear to be having a fantastic ski trip, until it turns out it's just their half-frozen bodies, which are buried in several feet of snow. A rescue dog locates their position, but as it's lunch time, the rescuers decide to put off digging them up until another time.

Retrieved from "https://americandad.fandom.com/wiki/Dancin%27_A-With_My_Cell?oldid=94207"
Community content is available under CC-BY-SA unless otherwise noted.