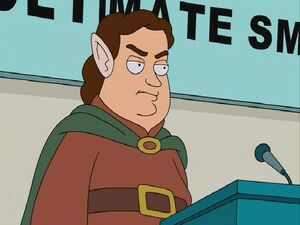 In "All About Steve", the CIA has been sent letters from a domestic terrorist hacker they can't decipher. Stan finds out from Snot that the hacker's language is "Elvish" and they translate the hacker's notes, discovering who the hacker is. They go to the sci-fi convention to find the hacker, Dan Vebber, a J.R.R. Tolkien fan who "hopes to create a middle-earth in the here and now."

As Stan, along with Steve and his friends look for Dan Vebber at the convention, Dan is giving a panel on Frodo Baggins v. Luke Skywalker. After a fight and chase, Stan and Steve corner Dan. Steve burns a pair of Peter Jackson's underwear to distract Dan. When Dan tries to use his use his 'ring of invisibility', it fails to work and he is shot in the leg by Stan.

Retrieved from "https://americandad.fandom.com/wiki/Dan_Vebber_(Character)?oldid=58537"
Community content is available under CC-BY-SA unless otherwise noted.