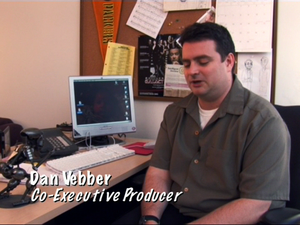 Dan Vebber is a writer, producer and story editor, known for his television work on animated shows such as Futurama, Daria and American Dad!. He was also a writer on Buffy the Vampire Slayer. After three seasons on American Dad, Vebber returned to Futurama. Vebber returned for Season 9 after five seasons absent.

In relation to American Dad!, Dan is owed the following credits:

Retrieved from "https://americandad.fandom.com/wiki/Dan_Vebber?oldid=49535"
Community content is available under CC-BY-SA unless otherwise noted.