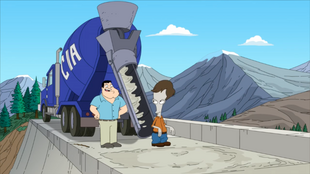 Dammmm, Stan!
Stan tries to get out of a fly fishing trip with Francine. 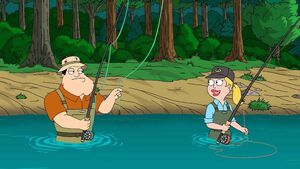 When a fly fishing trip turns out to be a disaster for him personally, Stan wants to get out of a return trip with Francine. Roger suggests damming the river, but after doing so, they didn't count on creating a lake on the upstream side of the dam. However, Stan finds the new 'lake people' rednecks friendly enough and brings Francine along to enjoy the new hangout, which disgusts her. When she discovers that Stan created the dam, she blows it up and tubes downriver. This annoys the lake people, who take off after her, leaving Stan caught in the middle. 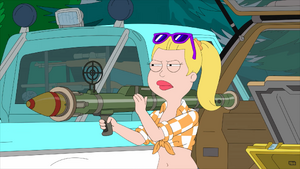 Getting Roger to help him, who has gone redneck and opened a 'dingy' lakeside cafe, they try to get to Francine before the lake people. During an attempt to take a shortcut, Roger is attacked and carried off by an owl. Stan nearly drowns when he gets caught in some rapids until he is fished out by Francine. Stan tries to intervene when the lake people arrive but is nearly killed as well until he is saved by Francine, who insists he hide and allow her to take care of things, allowing her to swiftly sends them packing with her fly fishing skills. Stan apologizes for only doing things that he cares about as Roger is dropped by the owl, and then carried away again moments later. 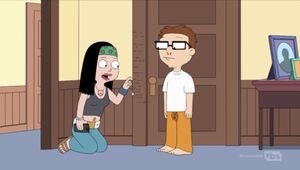 Meanwhile, Steve and Hayley discover a strange name on a door where their heights used to be measured and decide to investigate when Klaus acts suspicious. However, when he secretly confesses to Rogu that it was actually his make-believe son from a television commercial, Hayley and Steve are hiding nearby and confront him. When he breaks down in tears, they agree to help to meet with Omar in person. He actually agrees to work with Klaus until he raises a fuss because his actual height isn't what was expected, causing him to run from the house.

Retrieved from "https://americandad.fandom.com/wiki/Dammmm,_Stan!?oldid=90956"
Community content is available under CC-BY-SA unless otherwise noted.