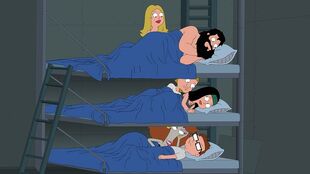 Daesong Heavy Industries II: Return to Innocence
Stan has a crisis of faith. Pt. 2 of 2. 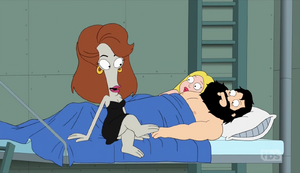 After a recap of the previous episode, we find Stan questioning the Lord's designs for him, which results in a sleepless night. Facing the possibility of being the only ones left alive, Stan is depressed but Francine is ready to make love, despite the entire family crowded in with them, although he isn't in the mood. To cheer them up, Roger breaks into song, but when Jeff joins the family in dancing, he leaves the temperature gauge unattended and the ship explodes. 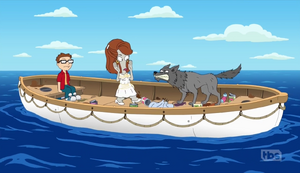 As they each struggle to survive the sinking, they are separated. Roger and Steve land in a lifeboat. With Roger ignoring Jeff and Hayley who are rushing their way, he drops the boat into the water. There, they grab supplies, but Roger also brings aboard a wolf, which makes things difficult. When Steve rips into him, Roger changes personas to a survivalist, although his skills are in doubt. When he reveals he has a cell phone, Steve insists on him calling someone and he reaches Klaus at home who had a rough trip back. Telling of their ordeal, the battery goes dead before they can finish. As the days pass, Steve becomes sunburned and Roger drinks seawater, which drives him further insane, frightening the wolf. Steve awakens from a nap to find that Roger has clothed himself in the wolf skin. When he attacks Steve, he is forced him to shoot him with a flare gun which sends him overboard. 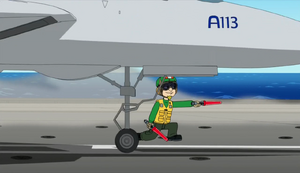 Jeff and Hayley find refuge on a crate, which sinks when Jeff drills holes in it in the belief that it would make them faster, but they are quickly found by a helicopter. They land on a navy carrier and find out the world didn't end, but to quit being considered a screw up, Jeff joins the navy. He finds himself directing aircraft on a flight deck, but is actually supposed to be mopping the deck instead of causing chaos and is taken up to the command station to be a spotter. When another officer questions the captain's favoritism towards Jeff, he reveals that Jeff may be his long-lost illegitimate son, producing a locket of a woman that bears a striking resemblance to Jeff. 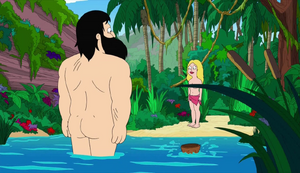 Stan and Francine are struck in the head by barrels in the explosion and wash ashore on an island without their memories, which is narrated as a documentary. They struggle to survive in their jungle habitat. They find themselves drawn to each other, but Stan's eating of a snake repulses her. She returns with coconuts, and moves closer to him until he flees. Taking a waterfall shower, Stan is observed by Francine who approaches him again. Exposing themselves to each other, they slip off to make love, but promptly fall asleep to the narrator's annoyance. He uses his foot to move them closer to each other until they actually have sex.

Roger lands in the water from Steve's shot and is seen by Jeff who spots the smoke from the flare and the navy rescues the pair. As the ship prepares to blast an island as part of an ongoing mission, they spy Stan and Francine's sex act. As they go ashore, Stan and Francine get their memories back when they remember that they have kids. After they leave, the navy resumes its mission and the narrator is blown up on the island. Back home, Klaus is enjoying the company of a female figurine until the family arrives, although Stan still doesn't know what life is about until Francine uses one of their terms of endearment and they smile. Convinced he needs saltwater, Roger chugs a pitcher of it, and Steve is forced to shoot him again.