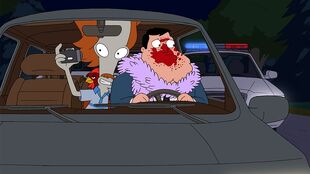 Daesong Heavy Industries
Stan has a crisis of faith. Pt. 1 of 2. 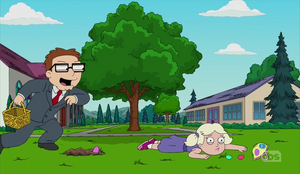 Stan drags the family off to Easter services over their objections. At Sunday school, Steve destroys the younger kids in the egg hunt and as a result, he is kicked out of Sunday school and entered into adult services. His questions annoy everyone and Stan in particular. He expounds on his beliefs afterwards over brunch at the Pancake House, but meets resistance from Hayley as well as Steve who challenge him to actually read the Bible. 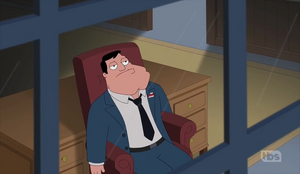 As he reads it with Steve, they start to bicker over the very first verses, although Stan starts to find his arguments coming up short and he finally cracks, losing his faith. Francine tries to get him to compromise his former beliefs to accommodate his faith but he has none of it. On the other hand, Roger encourages him to drop it completely, even breaking various commandments until he finds himself drawn into depravity. When Steve searches him out through Francine, she demands he “fix” Stan by giving him back his religion. Observing him sitting outside in the rain inspires Steve to find him a natural gas tanker in South Korea that could be the size of the hypothetical ark, which rosters his faith, but he sets out to take the family there to actually become a new Noah. 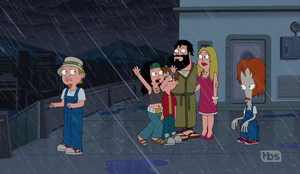 Stan changes his appearance to that of Noah. In South Korea, Jeff and Roger find a large shipment of overalls being loaded and head off on their own to take them. Stan finds his ship, but when Francine thinks he'll be happy just looking at it, he is actually invited aboard by company agent Robert Kim to be Noah, apparently on direct orders from God. As Stan leaves for "Noah training," Kim explains that it is a recurring problem with would-be Noahs seeking out their ship, so they gather them all together to put on a show and send them on their way satisfied that they have enacted their fantasy. Stan realizes that it is all fake so he actually takes over the ship after the other Noahs have left. As his family tries to talk sense into him, he dumps Klaus overboard as a fish can swim and wouldn't need the ark. He leads the family through the ship where they find it is actually loaded with real animals heading to a zoo, although this confuses Steve as Roger and Jeff rejoin them. As it starts to storm outside, Stan asks them all to accept his faith and Steve is the first to join in as there are so many unanswered questions about why a tanker ship is hauling animals. Francine also joins in, but when Hayley sets out to leave, a flood and lightning in the city stops her as they sail the ship away from the shipyard to Klaus' anger.