For a complete script, see: "Daddy Queerest" on the Transcripts Wiki 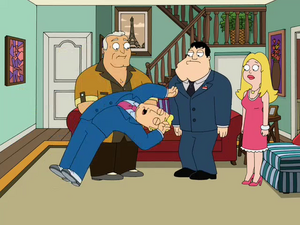 Stan: [while drunk] Francine, you need to come home right now. Greg was mean to me!
Tank Bates: What're you talking about, fruit loop? She's Terry's girlfriend.
Stan: No she's not. She's my wife! Greg is Terry's boyfriend!
Tank Bates: What?
Stan: Terry and Greg are in love! Your son is gay! [Terry faints in an overly-cliched manner; his father, confused, catches him] See? That's not how a straight guy faints.

Bullock: I had a few gay experiences while I was at boarding school. Nothing major, just a couple of friendly night-poundings.

Stan: What a day. Where's dinner?
Greg: At the store. I don't cook, Stan. We'll just have to go out to dinner.
Stan: But it's a weekday! That's once-in-a-while-on-weekends talk!
Greg: Straight women don't ask for much, do they?
Stan: They really don't. Just use coasters now and again and don't whiz in the shower on her birthday.

Stan: [Pushes Francine into the pool] Look, everyone! Her dress is see-through!

[After Stan breaks down a door]
Francine: Why did you do that?
Stan: Do what? Test the ax that could save our lives in a fire?

Roger: Hello, I'm Roger. I like to pretend! Come on!

Roger: [To Steve] Let's go get drunk. You're driving.

Retrieved from "https://americandad.fandom.com/wiki/Daddy_Queerest/Quotes?oldid=88106"
Community content is available under CC-BY-SA unless otherwise noted.