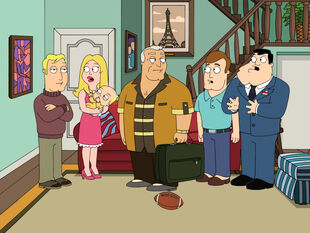 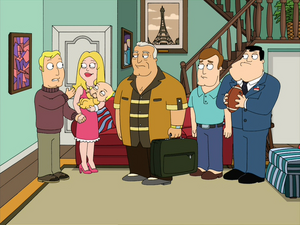 Stan and Francine attend a party thrown by their neighbors, Greg and Terry. The next day Terry comes to the Smith home, asking Francine to take care of his and Greg's child. Terry explains that he is nervous because his father, football great Tank Bates, doesn't know he is gay and is coming to visit while he awaits his jersey retirement ceremony. Though Francine gets Terry to promise that he will tell his father about his sexual orientation when he arrives, Terry panics and claims that he and Francine are lovers and have had a child out of wedlock. He also says that Greg and Stan are their homosexual neighbors, forcing Francine to stay with Terry and Greg to stay with Stan. Since they are both without their spouse, Greg and Stan decide to dine out and begin to bond, even bringing in Director Bullock. Impressed, Bullock invites them to a cocktail party. Stan ends up embarrassing Greg, and after being pushed into the pool by him Stan drunkenly reveals to Tank that his son is gay in order to get Francine to come home. Tank then leaves, unwilling to accept Terry for who he is. Stan, believing Tank must be gay himself and uncomfortable with is own homosexuality, crashes Tank's highly public ceremony at the local football stadium. Tank is not only shown not to be gay, but to also be a blatant womanizer. Terry finally works up the courage to ask his father to accept him for who he is, but Tank rejects his son and walks off the field. Terry and Greg get angry at Stan for making the whole situation into a public spectacle, but Francine defends him. Realizing that if Francine loves Stan for who he is, despite his faults, Greg and Terry decide they don't need an intolerant person like Tank in their lives. 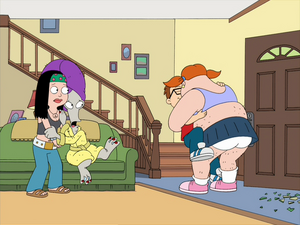 Meanwhile, Steve and his friends decide to obtain beer so they can attend a party. They hear about a person who buys beer for kids and decide to go meet him, with Steve eventually discovering the person to be Roger in disguise. When Hayley discovers this, she lectures Roger of what selling alcohol to minors can do. Roger brushes her off until an inebriated Steve returns from the party with an extremely ugly girl. The shock and horror of this sight leads Roger to change his ways and try to make up for it by spreading alcohol awareness. He decides to speak at Steve's school during an assembly about the dangers of drinking. The students don't seem to pay much attention until he shows them pictures of what Steve and Jewel did while completely wasted, leading the students to run out of the auditorium in horror, throwing away all of their alcohol on the way out. Steve is upset with Roger for showing everyone the photos, but Roger tells Steve that he'll take him drinking to make up for it.

Retrieved from "https://americandad.fandom.com/wiki/Daddy_Queerest?oldid=83790"
Community content is available under CC-BY-SA unless otherwise noted.