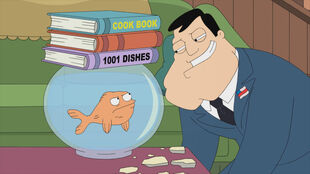 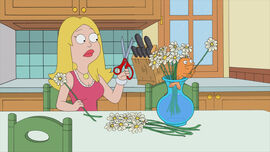 An expedition discovers Klaus' frozen human body. At home, Stan brags about how well he keeps his body in shape as Klaus discovers the news and shares his secret of a spectacular jump he never got to perform. He begs Stan to take him to the CIA to recover his body, but Stan puts him off. Depressed by the prospect of not getting his body back, Klaus tries to commit suicide without luck. Francine finally convinces Stan to take him to the CIA lab, but they discover that the body has been partially defrosted and decomposed by the technicians using it for party ice. Klaus get angry and knocks Stan out, stealing his body in the process. Returning home, the family quickly discovers that Klaus stole Stan's body, although they find it amusing after the way Stan has treated Klaus. Klaus assures them that he'll switch back after a couple of days, but tells Stan in private that he'll never get his body back.

As part of his revenge, Klaus abuses Stan's body by smoking, playing with dead animals, sleeping with diseased prostitutes, and doing drugs. At home, Stan protests to Francine over Klaus' abuse of his body, but isn't believed until Stan shows off the body tattoo Klaus got of an elephant. Klaus insists on keeping Stan's body and leaves to perform his jump, leaving Stan with no other choice than to use Klaus' old human body. The family pursues Klaus to the Jump City! ski area, with Stan following him on the lift and begging him not to jump. Stan pursues Klaus down the hill, forcing him into a tree and breaking his leg. As Stan is forced onto the jump, Klaus coaches him into allowing his body to take over, but after a few seconds of flight, he crashes and breaks apart. Francine and Hayley knock Klaus out and have the CIA return them to their correct bodies. Stan apologizes and tells him that he'll help him get back to being human. But when Klaus inquires when that will happen, Stan admits that it probably never will. 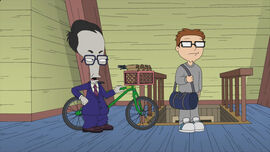 Meanwhile, Steve finds a brochure for Roger's new attic gym and gets the hard sell. After leaving, Roger leaves him dozens of phone calls. Steve confronts Roger over the calls, but tiredly agrees to a month's membership. As Steve starts to warm up to his membership, he finds that Roger has changed personas again to a Chinese restaurant owner and has given him a new job as a bicycle delivery boy.