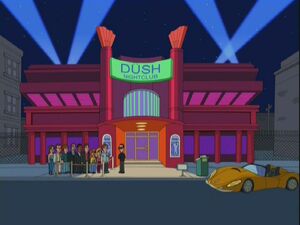 DÜSH is the nightclub Stan goes to with Roger in his persona of Rashid the Persian in "When a Stan Loves a Woman" when Francine temporarily divorces him so he can sleep with other women to prove that sex without love is meaningless. When Stan is too aggressive and fails to score, he leaves while Roger has success scoring with the bar whores.

In "One Little Word", Avery Bullock takes Stan to DÜSH while trolling for a "plump Asian Skank". Unable to locate one, he tries to settle for "tight white meat" and gets hit with a lady's drink glass when he offers her ten dollars.

Roger takes Hayley out to DÜSH to try her hand at a celebrity fundraiser after she dyes her hair blonde in "Blonde Ambition". There, she receives an invitation to another celebrity gala in Las Vegas.

Retrieved from "https://americandad.fandom.com/wiki/DÜSH?oldid=66062"
Community content is available under CC-BY-SA unless otherwise noted.