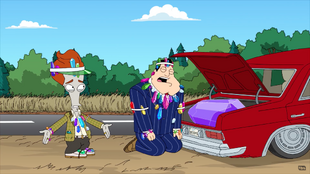 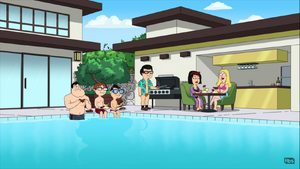 A cookout over at the Yoshida household makes Stan feel inadequate, and even worse, Francine invites them over in turn. After discussing his issues with Roger, he gets the idea to open credit cards in Steve's name in order to buy expensive goods to keep from being embarrassed, with the intention of returning them later. At Roger's further suggestion, he invests the money in crystals. However, when Stan prepares to return the items, he discovers that Roger used a loan shark to augment the credit cards and he needs a further $50,000 to pay them back before they break Steve's legs. 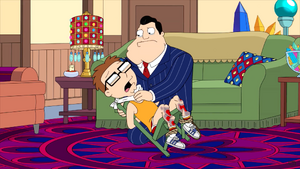 After continuing to listen to Roger's suggestions, they head to Atlantic City to try to raise the money using the crystals and actually hit it big. However, when they make a restroom stop at a knick-knack store, Roger spends a significant amount on a giant crystal, leaving them short just as the money comes due. They arrive home to find the loan shark already waiting with his goons. They reject the offer of Roger's giant crystal and proceed to break Steve's legs as promised, departing as they had completed the loan terms. Roger employs his giant crystal to help 'heal' Steve, who still faces a long recuperation.

Meanwhile, Klaus talks Jeff into going on a road trip with him to Lake Wittenberg. Klaus spies an old friend and discovers that he's about to get married and Klaus wasn't invited. Irritated, Klaus decides to break up his friend's pending nuptials by mildly poisoning him with a beer. However, it ends up being taken by the potential best man and Jeff is asked to stand in his place. Still determined to poison his old friend, Klaus loads up another beer bottle, but a passing waiter knocks it into his bowl, affecting him.