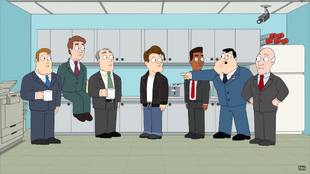 Cry Baby
Stan enlists Steve to teach him how to cry. 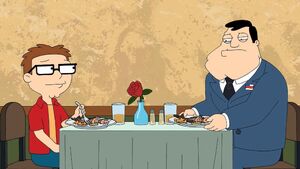 When Bullock needs an agent who can cry for a mission, Stan comes up short and the mission goes to Jackson. When Stan finds out that Steve is up for an award but feels sorry for another contestant who has perpetually come in second place, he enlists him to teach him how to feel empathy and cry. After failing on a personal level, they seek professional help, but Stan can finally cry when he realizes the meaning in the ending of Cars 2. He challenges Jackson to a cry-off and is successful in taking the mission back, but has difficulty in turning off the tears when unneeded. Returning to the doctor who helped him cry, she succeeds in removing his empathy, but over a meal with Steve, he decides to take him to the doctor to stop his empathy as well so he won't feel sorry for his competitor when he wins. 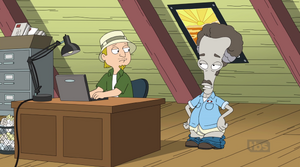 However, Steve's sudden loss of empathy puts him in danger of losing his award, so Stan employs Jackson to spin a tale of abuse at the hands of the former's competitor and cry for emphasis. This sways the judges, but Steve still remains cold. Desperate, Stan employs a trick he learned from Indiana Jones and the Temple of Doom and shoves a hot torch into Steve's chest. Steve reveals that he was faking the entire time so that his competitor would actually win and it wouldn't seem like he intentionally threw the contest. As a result, the judges change their minds yet again and give the award to Stan.

Meanwhile, Roger employs Jeff to help him write a letter detailing his personal troubles in an effort to install Tuttle's air conditioning, having botched the job the previous year. The latter writes a lengthy missive, which succeeds, but when it comes time for the actual installation, they wreck Tuttle's ceiling even worse than the previous year.