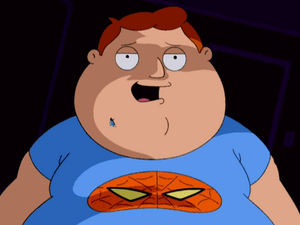 Craig Ferguson is a Scottish-American television host, stand-up comedian, writer, and actor. He is the host of The Late Late Show with Craig Ferguson, an Emmy Award-nominated late-night talk show that airs on CBS.

Before his career as a late-night television host, Ferguson was known in the United States for his role as the office boss, Nigel Wick, on The Drew Carey Show.

Craig provided the voice of Evil Barry in "With Friends Like Steve's" and "Stan & Francine & Connie & Ted".

Retrieved from "https://americandad.fandom.com/wiki/Craig_Ferguson?oldid=82785"
Community content is available under CC-BY-SA unless otherwise noted.