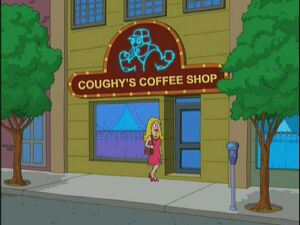 Coughy's Coffee Shop is where Francine meets Steve in "Iced, Iced Babies". He knows Francine set him up with drugs to break up his relationship with Debbie, and he tells his mother he’s ready to move on. He says he’s found another woman and Francine has to move on. Francine realizes she was set up by meeting in a public place to avoid a scene and leaves in tears. Steve then tells the hostess Gladys that he has found another coffee shop in the same manner.

In "The Scarlett Getter", Stan and Roger meet at the coffee shop for Stan to warn him that an alien hunter has been brought in by the CIA. Then Stan spots Scarlett Reynolds, an old CIA boot camp crush. When Roger takes notes of her good looks and note he should try to take her out, Stan rudely dismisses the idea and invites Scarlett over to the Smith house.

In "National Treasure 4: Baby Franny: She's Doing Well: The Hole Story", Stan and Roger drown their sorrows over coffee when they are unable to kill Mr. Yoshida's wife and produce capital for their idea for male stripper shoes. As they look out the window, the see an advertisement for The Sausage Factory and find that Mr. Yoshida stole their idea.

Retrieved from "https://americandad.fandom.com/wiki/Coughy%27s_Coffee_Shop?oldid=36768"
Community content is available under CC-BY-SA unless otherwise noted.