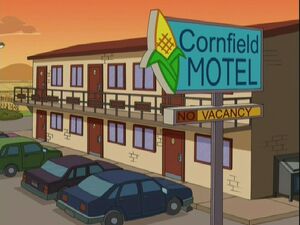 The Cornfield Motel is where the CIA sends the all of the Smith's neighbors when Stan has them kicked out of their houses for not liking him in "I Can't Stan You". When Stan is eating nuts in his now-deserted home after banishing his family as well, when he chokes on one and runs outside looking for someone to help him but there is no one to be found. He collapses in the street but Lisa’s son Johnny comes running and kicks him in the crotch dislodging the nut. Stan thanks him for saving his life but is confused because he thought Johnny hated him. Johnny says that just because he trash-talked him doesn’t mean he hates him. Johnny takes him to the Cornfield Motel where the neighbors are staying and shows him that they all trash-talk each other too. Stan feels better and becomes pals with Johnny.