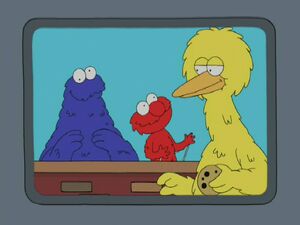 Cookie Monster is a fictional Muppet character on the children's television show Sesame Street. He is best known for his voracious appetite and his famous eating phrases: "Me want cookie!", "Me eat cookie!", and "Om Nom nom nom" (said through a mouth full of food). He often eats anything and everything, including danishes, donuts, lettuce, apples, bananas, as well as normally inedible objects such as salt and pepper shakers, signs, napkins, pencils, typewriters, telephones, motorcycles, Peabody Awards, trucks, a safe, a VW Beetle, and the Letter of the Day. However, as his name suggests, his preferred food is cookies.