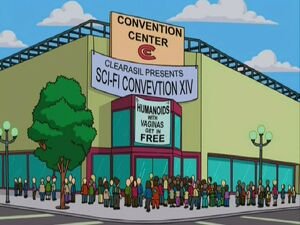 The Convention Center is the site of the sci-fi convention where Stan, Steve and his friends try to catch Dan Vebber, a domestic terrorist trying to bring Middle Earth to life in "All About Steve". At the convention, Roger finds Kurt who he abducted and probed who went insane. Roger spends the next two hours in the bathroom hiding from Kurt, both because the probing is presented with the undertone of a one night stand and because Kurt wants to show Roger to his ex-wife Eileen to prove aliens exist, which would blow Roger's cover.

Retrieved from "https://americandad.fandom.com/wiki/Convention_Center?oldid=34889"
Community content is available under CC-BY-SA unless otherwise noted.