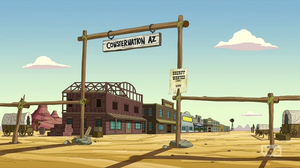 Consternation, Arizona in 1870 is the town where Stan seeks out Brian Lewis, a former slave and town barber that he worked with during the civil war in "West to Mexico" as he tries to elude Roger, a bounty hunter who seeks him for the murder of his general.

The town is plagued by the Bullock gang of outlaws who murdered Hayley's family and abuse the residents such as Francine, a saloon dancer. Klaus is the saloon bartender and Steve plays the piano for Francine.

The Bullock gang beats Stan after they take him for the new town doctor and Roger eventually recognizes him for the bounty he seeks. But when the townsfolk decide as a group to stand up to the gang, they set off to follow Roger and recover Stan. The pair come across Hayley on her family farm, being forced to dig her own grave. With Roger's assistance, they take out the gang although Roger is mortally wounded in the process. He disguises himself as Stan so they can collect the bounty on him, and instructs them to head back east.

Retrieved from "https://americandad.fandom.com/wiki/Consternation,_AZ?oldid=74682"
Community content is available under CC-BY-SA unless otherwise noted.