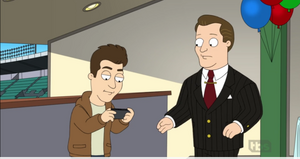 When Baseball Commissioner Mayhaus throws a birthday party for his son Ian in "Fantasy Baseball", he discover him watching Steve Smith umpire a baseball game which has become an internet sensation, despite Ian being completely disinterested in baseball in general. Steve, who incorporated his fantasy game acting into the games had become the centerpiece of the sandlot games he worked.

Seeing a chance to invigorate baseball, Commissioner Mayhaus promotes him to the major leagues and attendance soars, but leaves Stan alienated as his son is pulling attention for a game he regards as a serious affair. to increase attendance even more, Steve is promoted to deputy commissioner of rule development, much to Stan's horror. Steve implements various fantasy elements into the game, including actual wild animals, samurai, flames and such, but notices that while sons are bonding with their fathers, he has not. He finds Stan trying to role play a game of baseball as he knows it on a role-playing game that Steve created for them, but failing due to a lack of imagination. While they bond as Steve tries to help him, the conditions at the game have gone out of control among the players and crowd.

Retrieved from "https://americandad.fandom.com/wiki/Commissioner_Mayhaus_%26_Ian?oldid=82583"
Community content is available under CC-BY-SA unless otherwise noted.