Comb Over: A Hair Piece 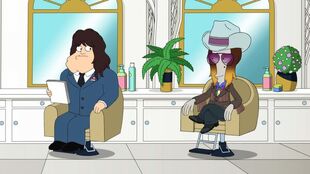 Comb Over: A Hair Piece
Stan enlists Roger's aid to cure his baldness. 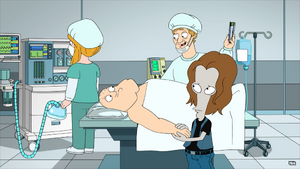 When Stan decides to pick on the family's shortcomings, Steve snaps and points out his baldness. When he discusses his problem with Roger, the latter suggests seeking professional help. After his body rejects a hair seed treatment, as well as destroying his kidneys, a successful kidney-hair transplant from Tuttle is needed. To style his new hair, Stan goes to see Roger's famed hair stylist persona, Josay Bosay. But after getting a cut styled after Rod Stewart, he declares he hates it and ruins Roger's reputation. When he hears Roger's crying, Klaus helps him realize that he hurt his feelings, and he tries to make it up by lying. But when Roger's attempts to fix things backfire, Klaus keeps encouraging him to continue the lie. 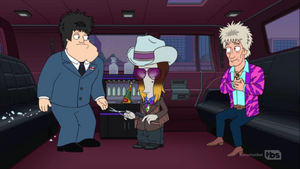 In a desperate move, Stan and Roger reach out to Rod Stewart to give him a new hairstyle, but when he rejects them, they end up kidnapping him. When they are finally brought to a halt during a police chase, Stan can't contain himself any longer and lets Roger know that he's a lousy hairstylist, but he's still a good friend. Rod allows Roger to style his hair, but when they exit the car for the police, his appearance is so altered that they no longer believe that Rod was kidnapped.

Meanwhile, encouraged by Roger to live their dream to be Nightcrawler-style paparazzi and photographing crash scenes after seeing the film, Steve, Hayley and Francine join in the chase, but end up running off the road themselves.

Previous Episode /// Comb Over: A Hair Piece \\\ Next Episode