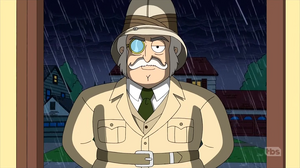 Colonel Withersby is an apparently close friend and family member of the Smiths.

When he arrives at Francine's dinner party in "Death by Dinner Party", he is warmly welcomed by all of the guests. But when Al Tuttle and Greg Corbin go missing, the group splits into teams with Steve paired with the Colonel. His elation soon turns to fear as the colonel projects an air of menace. When the rest of the group hears a scream from outside, at first it appears that the colonel has claimed another victim, but they have actually found a dead delivery boy intended for Klaus' catering.

Back inside, Greg shows up reporting that he's been knocked senseless, but when he starts to reveal the killer, he is stabbed to death when the lights go out. The lights continue to flicker, as it soon appears to Roger that everyone else dead, with only the colonel is left. He menaces Roger, who picks up a knife and stabs him multiple times before the lights are restored, revealing that it was an elaborate prank with the only injury to the colonel himself.

Retrieved from "https://americandad.fandom.com/wiki/Colonel_Withersby?oldid=77675"
Community content is available under CC-BY-SA unless otherwise noted.