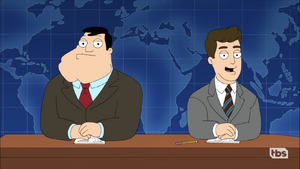 Colin Jokes is Sketches and Laughing, also known as S and L's, star comedian in "Stan Moves to Chicago".

When he is believed to be under threat from the Chinese, the CIA takes advantage of Stan's attempt to break into comedy to slip him onto the show. but when Stan bombs onstage, he freezes up just as Francine and Klaus spy a detonator in his hand and realize that Colin is the villain. They manage to snap Stan out of his shock by playing some recorded laughter from the control room, allowing his CIA instincts to kick in and defeat 'Colin', who was really an imposter who had the real one tied up in his dressing room.