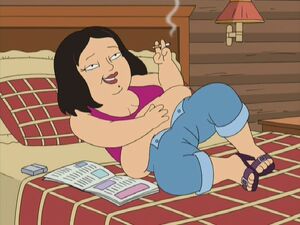 Coco is Bullock's prize "plump Asian skank" mistress he picks up in "One Little Word". He refers to her as "the trifecta." She is fat, Asian, and loose. When Avery Bullock reveals that Avery Jr. is making it a challenge to score with girls and passes Avery Jr off to Francine, causing Roger to become jealous. When Francine becomes too frazzled dealing with the two of them, Stan hits on the idea of bringing Bullock's wife Miriam Bullock back from the Middle East to deal with him. When Stan brings her back, he reveals that she has been brainwashed and wants to destroy America. Bullock happens to have run into the girl of his dreams: Coco. He has Stan keep Miriam and Avery Jr. until he can set up a separate house for Coco. Miriam tries to take Jr. hostage, but when Miriam finds out the baby is hers, she warms up to him. Bullock sets Coco up in a cabin across the lake from where the Smith's are trying to have a Valentine's getaway, forcing Stan to keep crossing the lake to keep Coco in cigarettes and entertained. Roger is heartbroken that little Avery was taken away when Miriam and Bullock return to their own house and steals him back, but when Jr. breaks one of Roger's crystal spiders, specifically the daddy long legs. he tries to drown him by pushing a car with the baby in it over a cliff into the river Stan is using to travel back and forth between the two cabins. Stan stops him and Roger concocts a plan to get them out of trouble by making it look like Coco kidnapped the baby. Bullock and Miriam rush in to save Jr., but when Coco sees Miriam, she responds that she's going back to being the prettiest girl in Ohio and leaves.

She has a crowd scene cameo on the doomed bus in "100 A.D.". She returns briefly in memorial an the funeral for the crash victims in "Son of Stan".

Coco is voiced by Karen Maruyama.

Retrieved from "https://americandad.fandom.com/wiki/Coco?oldid=69598"
Community content is available under CC-BY-SA unless otherwise noted.