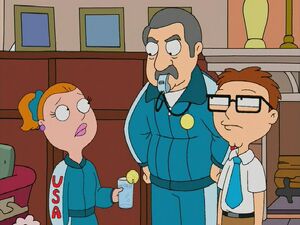 Béla Károlyi (Born September 13, 1942) is a gymnastics coach. Born in Cluj-Napoca, Romania to an ethnic Hungarian family, Károlyi and his wife, Márta, emigrated to the United States in 1981 and both have dual citizenships for Romania and America. The Károlyis have coached both United States and Romanian Olympic teams to medal-winning success.

Coach Bela Karolyi is Betsy White's strict gymnastics coach. In "Deacon Stan, Jesus Man", he becomes angry when Betsy has a lemon wedge in her water and smashes a piece of lemon in her face.

Retrieved from "https://americandad.fandom.com/wiki/Coach_Béla_Károlyi?oldid=58532"
Community content is available under CC-BY-SA unless otherwise noted.