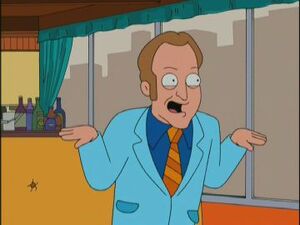 Clive Davis (born April 4, 1932) is an American record producer and music industry executive. He has won five Grammy Awards and is a member of the Rock and Roll Hall of Fame as a non-performer.

Clive is Roger's, in the guise of Roger Epstein, business manager at Roger Epstein Music in "The Best Christmas Story Never". When the era of disco ends in the early 1980s, Clive has to tell Roger that he is completely broke.