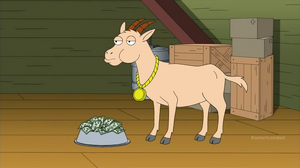 Clarence is a goat kept at Roger's Place.

When Roger accuses his persona of Betsy of dipping into the till in "Roger Passes the Bar", she points out that it was Clarence who is seen eating a bowl of cash. Roger snaps at Betsy that Clarence claims he bought his "salad" and she is becomes upset that he takes the word of Clarence over hers.

Retrieved from "https://americandad.fandom.com/wiki/Clarence_the_goat?oldid=55934"
Community content is available under CC-BY-SA unless otherwise noted.