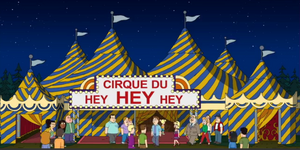 Cirque du Hey Hey Hey is a second circus that Hayley obtains tickets to in "Stanny-Boy and Frantastic". Cirque du Hey Hey Hey is based on the television show What's Happening?. After they accidentally cause the breakup of a couple named Tom & Cami to slow them down by making them have children, Stan and Francine take the tickets and each invite Tom and Cami to force them together. They refuse to fall for the ruse and Stan and Francine are forced to admit that they are parents and it's the greatest thing to happen to them. However, Francine also admits to the sabotaging of their birth control. Tom and Cami get back together but the friendship is over to Stan and Francine's relief. After being admonished by one of the performers for talking during the show, Stan tries to hit him in the privates but is blocked and hit in turn.

Retrieved from "https://americandad.fandom.com/wiki/Cirque_du_Hey_Hey_Hey?oldid=30607"
Community content is available under CC-BY-SA unless otherwise noted.