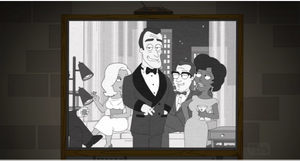 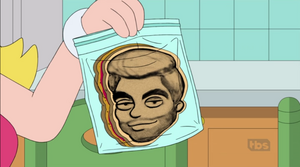 Christopher Whitelaw Pine (born August 26, 1980) is an American actor notable for playing James T. Kirk in the Star Trek reboot film series. Other films include Into the Woods, Jack Ryan: Shadow Recruit, The Finest Hours and Steve Trevor in Wonder Woman and its sequel.

Chris provides the voice of Alistair Covax in "Rabbit Ears".

When Francine makes peanut butter and jelly sandwiches for the family in her dream in "Enter Stanman", Roger hopes for and receives one in the shape of Chris Pine.

Retrieved from "https://americandad.fandom.com/wiki/Chris_Pine?oldid=84754"
Community content is available under CC-BY-SA unless otherwise noted.